Sri Lanka Jathika Hela Urumaya (JHU) chief strategist Champika Ranawaka issued a severe warning to the government on June 29, 2009 at a press conference held in Colombo. He warned JHU would resign from the government if it proceeded in fully implementing or exceeding the 13th amendment to the constitution.


With this statement Champika outshines as a leader of a party that would not appease with a post of cabinet minister, several MPs and Provincial Councilors. He shows that the JHU will take the challenges in power politics and will march forward.


It is a challenge to the JHU's main contender People's Liberation Front (JVP) as well. In the recent years, JVP's political strategy was parallel to the JHU's.


In the post-Tamil Tiger period, clear division can be seen among the second level leaders of the government regarding the implementation of the 13th amendment to the constitution that was introduced in 1987 under the influence of India. Provincial Councils were established under it in 1988 but they were not fully implemented with police and land powers.

Unofficial sources say that India has stressed Sri Lanka to fully implement the 13th amendment when a top level government delegation visited the regional power center recently. It is understood that the top leadership of the government remains silent diplomatically although they are not interested in power sharing with Tamils.


Meanwhile, the National Freedom Front (JNP) has also begun campaigning against the 13th amendment and a seminar organized by party front organization Patriotic National Movement is to be held on July 07 in Colombo.

We learn that lobbying within the government against the 13th amendment has already begun but many ministers remain vigilant regarding the developments without taking a stance. They wait for the sides to gather momentum amidst local and foreign influence.


Meanwhile, the All Party Representative Committee (APRC) that was appointed by the President to propose ways for power devolution is going to propose to exceed the 13th amendment to the constitution with clearly defining the powers of the Provincial Council and the Center. The concurrent list is to be abrogated accordingly, in addition to some other constitutional reforms. JHU also represented the APRC that was chaired by Minister of Science and Technology Thissa Vitharana, a member of the Trotskyist Lanka Samasamaja Party.

Colombo Pride - 2009 week has began with with a kite festival held at Mt. Lavinia Beach on June 28. The event named as 'Rainbow Festival' stretches during the week and following is the schedule: 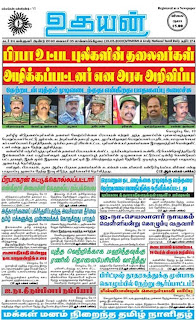 The newspaper office and the agents of the Jaffna-based Tamil daily Uthayan has received the following "last warning" on Saturday, June 26. Uthayan is an independent newspaper published since 1985 in Jaffna, Sri Lanka. It did not discontinue publishing and survived amidst severe hardships amidst civil war. The election campaigns for the Jaffna Municipal Council has now been kicked off.


"From the time Uthayan started its publication upto now, Uthayan

publishes news items to confuse the Tamil people and their Liberty.

Now after regaining the harmony and Liberty in the Society, "Uthayan"
News items are aimed at destroying the permanent peace and causes the
public to turn to terroists again. Further, these news items promote
communal feelings among Tamils and cause to destroy the peace. Your
news items are twisted from actual truth.

Your paper appears to be a mouthpiece of the Terrorists. Our earlier
warnings have been disregarded by you. Therefore, we are compelled to
take a decision not to allow the publication of Uthayan in Jaffna as
it publishes news that cheat the people.

Therefore all Employees, Agents, Reporters and Security Guards should
officially resign from the Organisation with effect from 30.06.2009

If this final warning too is disregarded, you will face capital
punishment (Death sentence) imposed by us."

Fate of the 10,000 insurgent suspects yet to be determined by Sri Lanka state 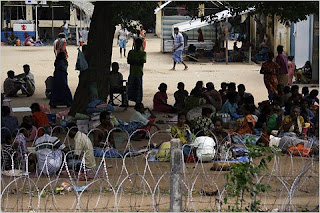 "Human rights watchers have estimated that close to 10,000 post-war detainees with suspected links to the Tamil Tigers are being held at government safe houses even as screening of war-displaced persons continues in camps in Vavuniya," writes Satarupa Bhattacharjya to Sunday Times of Sri Lanka on June 28, 2009. Over 270,000 displaced people from Vanni are held in these camps.

Sri Lanka state does not consider these persons as political prisoners or prisoners of war but terrorists. Their fate remains still undetermined while several thousands more persons suspected of abetting terror acts are languishing in detention or remand for years due to slow legal process.


"Between March and May 2009, ICRC delegates held private interviews with more than 6,700 security detainees in nearly 135 government-run places of detention throughout the country and provided them with clothes, toiletries and recreational items. The ICRC supported the families of some 1,400 detainees to visit their detained relatives," reported Relief Web.

The government granted amnesty to most of the rebels of 1989 insurrection led by People's Liberation Front (JVP) in a rehabilitation process that stretched for some years while some insurgents were tried for criminal offences. However, the top and middle level leadership was eliminated and the present situation is also similar to 1989 era.

Water for north from Iranamadu tank Image by trokilinochchi via Flickr
Sri Lanka Water Board says that it will build a water supply system in the Northern Province areas that were recently captured from the Liberation Tigers of Tamil Ealam.

Iranamadu reservoir will be the source of water and areas north of Kilinochchi like Jaffna and Chavakachcheri will be supplied water by this project.

The feasibility study has already been done and the Asian Development Bank will provide 80% of the $ 60 million capital investment.

The purification plant that is to be located in Paranthan will have output of 11 million gallons.

Colombo to use a bacteria for mosquito control Image by jwinfred via Flickr
Public Health Department of the Colombo Municipal Council has taken steps to use Bti (Bacillus thuringiensis israelensis) for mosquito control a dengue is spreading throughout Sri Lanka taking hundreds of lives.

Bti is a naturally occurring bacteria that is specific to mosquitoes and black flies, says goodbug,com website. It means that it is non-toxic and safe to use around humans, pets, wildlife and other insects. Bti is a spore forming bacteria that produces a protein crystal which is toxic when ingested by mosquitoes and black flies. Mosquito larvae that have ingested the bacteria and its protein crystals stop feeding within hours and will die within days. Repeated use of Bti is recommended to control mosquitos.

While Bti is non-toxic to humans, it is not approved for use in drinking water supplies. Sri Lanka imports Bti from US. 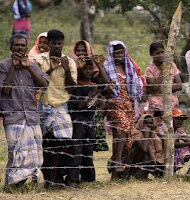 Six Christian priests, four from the diocese of Jaffna, and two belong to Oblate Missionaries of Mary Immaculate (OMI) are reportedly detained by the defense authorities of Sri Lanka following their migration to the government-controlled areas from the rebel-held territory more than a month ago.

AsiaNews.it reported that the Bishop of Jaffna had requested their release but had not yet received any response from the Ministry of Defense.


These priests remained with the civilians in the conflict zone until the last leg of the military operations against the Tamil Tiger rebels. They later migrated to the governemnt controlled areas where they were arrested with many others including doctors who ran the makeshift hospitals in the government proclaimed 'no-fire zone'. Nearly 300,000 intrnally displaced persons are held in refugee camps in Vavuniya.

Sri Lanka tourism: "Small Miracle" shown as "Land like No other" gone

Aiming to revive the tourist industry of Sri Lanka in the aftermath of the devastating civil war, Sri Lanka Tourism officially launched its new logo and tagline “Sri Lanka Small Miracle”, ushering in a new era for Sri Lanka Tourism.

The new brand of Sri Lanka Tourism was conceptualized following months of research by A C Nielson, and strategic planning sessions intended to replace the current tagline “Sri Lanka, Land like No other”. As part of the communication campaign, many promotions, road shows and press conferences were planned across fifteen cities in ten countries leading up to the local launch- a move that is expected to attract and generate more tourists into the island.

Leading up to the rebranding, Sri Lanka Tourism launched an island wide programme in May titled, “Making of the Small Miracle”. The main objective of this programme was to get all Sri Lankans to be a part of the rebranding. Local communities were asked to provide pictures, artifacts, and other collectibles that they believed was a good example of Sri Lanka. Sri Lanka Tourism ended this programme successfully last week, having collected thousands of items.
The collectibles were displayed at an exhibition on the day of the launch while some of the best items were used by the communication agency for the new print campaign.

Coinciding with the new brand launch, all communication material of Sri Lanka Tourism have been revamped .The website was re-launched with a new look and feel in keeping with the brand strategy while brochures with eight different themes unique to Sri Lanka have also been printed. Posters, stationary and other memorabilia will be available.

In addition a new print campaign will be launched in prominent international trade magazines as well as TV campaigns on BBC, CNN, Al Jazeera and Discovery Travel & Living. To mark the launch, Sri Lanka Tourism introduced value additional offers for tourists. A postcard campaign will be launched the day after the rebranding, where 250,000 post cards will be distributed while a discount booklet campaign will also launched with over 50 discount offers in a booklet. 10 postcards and a discount booklet will be bundled together and packed in a gift box and handled over to tourists arriving in Sri Lanka from June 24thfor a period of one month.

In addition, a cyber competition for the blogging community is planned to be launched for six months beginning this week.A radio campaign to promote lesser known places in Sri Lanka was also launched locally through Narambamu Sri Lanka – the domestic campaign.

A commemorative stamp was launched at a Press Conference which symbolized the new brand- Small Miracle.Meanwhile addressing the guests and media via a live feed from Temple Trees at the launch of Small Miracle at the BMICH, His Excellency President Mahinda Rajapaksa declared 2011 as a “Visit Sri Lanka Year”. In keeping with this theme, a series of activities and events have been planned in 2011 to lure in more tourists to the island.

President Rajapaksa in his address stated that “Having regained peace, my vision for development of tourism has become a reality. Every effort will be made and all resources will be provided to Sri Lanka Tourism to meet the target of 2.5 million tourists by 2016, as envisaged in the tourism strategic plan”