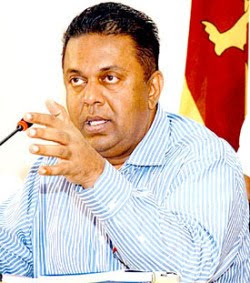 (September 11, 2009 - Lanka Polity) Sri Lanka's former Foreign Minister Mangala Samaraweera, a dissident of the ruling party, says that that the Police Narcotics Bureau has informed him that the country’s biggest drug dealer is a minister.

He pointed out that racketeers are spending millions of rupees of black money in their polls campaigns in recent Provincial Council polls aiming to obtain ruling party ticket in the upcoming general election.


He said the Parliament of Sri Lanka would soon become a center for the racketeers to launder black monies. Samaraweera pointed out that some close associates of President Mahinda Rajapakse that are contesting to the Southern Provincial Council election are spending massive amounts of money and one person even uses a helicopter. He also said that President Rajapakse's nephew Shashindra Rajapakse that contested for the Uva Provincial Council election spent a colossal amount of money well over Rs. 75 million (over US $ 650,000) for his campaign.


Samaraweera was the campaign manager of current President Mahinda Rajapakse at the 2005 Presidential. He was a senior cabinet Minister since 1994 sans a brief period from 2001 to 2004. He defected from the ruling regime in 2007 and appeared with the opposition since then.
at September 11, 2009