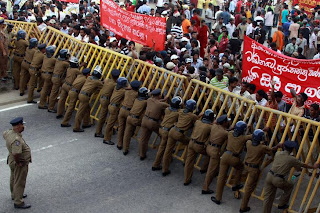 (May 19, 2011,  Lanka Polity) Sri Lanka President Mahinda Rajapaksa will inaugurate the so called 'leadership and positive attitude training course' of the new intake of university students on May 23.

The Ministry of Higher Education has made this course compulsory for the students. One who fails to follow this course without valid reason cannot enter into a university to follow a formal course. This condition appears to be a violation of human rights and definitely it will be raised in the courts, if enacted as per what is meant by the calling letter for this course.

The ceremonial inauguration will be held with the participation of the 10,000 students that are to be taken in for the training as the first group of the batch. All 20,000 students of the 2011 batch are to be trained under the programme.

They will be provided training at 28 training centers under the Defense Ministry. The duration of the training course is three weeks.

The authorities have not clearly indicated why the Ministry of Higher Education opted to the military to provide leadership training while the university system had better teachers for such course. The university teachers' associations that have focused their attention primarily to the salary issue for which they are struggling keep mum regarding this training.

The Minister of Higher Education S.B. Disanayaka said that the programme was not a military training although it would be held in military camps. The male and female students are provided with separate lodgings in hostels and the Ministry has taken steps to guarantee the security of the students, he says.

The military style training of the university students seem to be also a post-war situation. The massive military machine that was created for the war with the Liberation Tigers of Tamil Ealam (LTTE) may be idling without meaningful tasks to their caliber. That can be one reason the government wants them to be engaged in a task like this that can earn them back a kind of respect from an elite section of the society. It is true that the military machine absorbed a good portion of the highly skilled labor of the country. Therefore, the military may adapt to the new responsibilities.

Certain sections of the polity, especially the leftists, argue that this is another move of the government to militarize the society. However, the argument inherits the counter argument itself since the move can also be a measure to demilitarize Army through actions by which they are made to engage more in non-military activities.

Yet one thing is crystal clear. A country cannot be militarized when military has no powerful enemy to engage in a war.

This can be another poor perception of the education authorities of Sri Lanka who still think that all university students are JVP members. They wonder how the JVP recruits them and think that it is done through the brainwashing conducted in ragging. Then the higher education authorities seem to take the ragging and brainwashing to their hand. The Hon. Minister of Higher Education has told that the leadership training is an action to stop ragging in universities.

Leadership training is not a basic requirement to enter the private universities. Are they not making leaders?

Leaders are the people like S.B. Disanayaka, Hon. Minister of Higher Education who changes parties time to time to cling to leadership. He was once in fame of building a massive mansion in Hanguranketha. The house was named by state media under Chandrika Bandaranaike Kumarathunga as Samurdhi Mahal since the Minister held the post of Minister of Samurdhi (Poverty Alleviation). The Minister was also jailed for two years by Supreme Court for contempt of court. Later he was pardoned by the President Mahinda Rajapaksa.