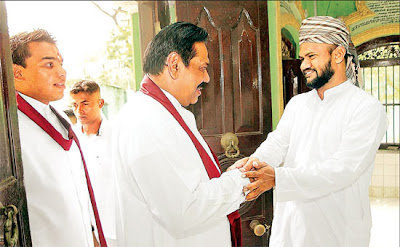 President Mahinda Rajapaksa during his tour of Kataragama visited the mosque situated in the Kataragama Sacred City on April 15. Having been welcomed by the Moulavi of the mosque, the President participated in religious observations and received his blessings. Uva Chief Minister Shasheendra Rajapaksa, Indigenous Medicine Minister Salinda Dissanayake and Parliamentarian Namal Rajapaksa accompanied the President during his visit.
Picture by Nalin Hewapathirana (Daily News)

This happens in a time the President's all powerful defense secretary brother is openly supporting the Buddhist extremist Bodu Bala Sena (BBS).

The BBS succeeded in forcing Muslims to stop issue of Halal certificates for the benefit of devout Islam followers. Halal protest was against charging money from all consumers for a certification which was only  for a section of the society.

Can anybody protest any such certificate issued free of charge displayed on products for the benefit of Muslims? One can refrain from buying such products based on personal dislike to it and to Muslims. But no one has ethical or moral right to protest it. 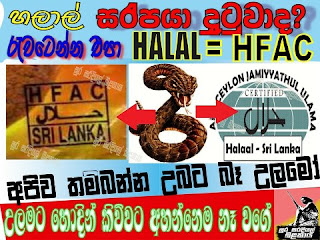 But, see what is happening now. I found this banner and a link to a related blog post in Facebook where hate campaigns freely go on with no control of BBS or whatever. One may perceive this as the online stuff is spilling to society but what actually happens is the reversal.

How can we understand what the government  is doing in ethnic front, in this backdrop? The government is generalizing hatred against Muslims and Islam while individually picking up Muslim leaders before media cameras. Personal relationships of the Muslim leaders with the President prevents them leading the masses against the injustices caused against them.

This approach not only marginalizes Muslims in Lankan society but also liquidates their protests and weakens their efforts to stand as equal citizens. This further appeases the Muslim countries that may worry about the fate of the Muslims in the country. Remember, the government also summoned the Colombo diplomats of the Muslim countries with the hope of continuing their support in the following day the above photograph was taken.

Muslims should be very careful about this racist approach of the government.