Sri Lanka major opposition United National Party (UNP) MP Harsha de Silva announced that the complaint against him over assault had been withdrawn by the plaintiff.

He said that the plaintiff had to withdraw the complaint since his conscience appealed him and there was an attempt to sling mud on the MP's image based on this incident.

A driver of a medical doctor lodged a complaint against the UNP MP over assaulting on January 26.

The plaintiff said that the MP hit him on his head after a verbal exchange as he was cleaning a garden adjacent to a property of the MP in Colombo. After that a security guard of the MP slapped on his face, he said, for which he sought treatment.

Later the MP has tried to settle the issue and the victim said to media in tearful eyes that he was sorry since people's representatives behaved like that.

The MP now said to media that the driver spoke to him insolently.

Government MPs naturally enjoy respect thanks to state powers they have. If Opposition MPs want to earn the real respect of the people, they must be decent first.
at January 29, 2014 No comments: 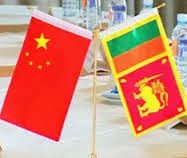 China has agreed to assist Sri Lanka to repair the country's first ever coal power plant which has been stuck with a wave of break downs since its inception.

Sri Lanka Minister of Power and Energy Pavithra Wanniarachchi had discussions with the officials of the Sri Lanka embassy of China on January 28 in regard of this. The discussion was held under the direction of the government of China.

The diplomats of the Chinese embassy agreed to coordinate the suppliers of the machinery and components of the Chinese built coal power plant to have them tested the quality of the equipment. The officials also agreed to have the defects of the equipment identified and repaired by the supplier in case fault is identified, the Ministry of Power and Energy announced after the discussion.

The first phase of the Norachcholai coal power plant, which cost US$ 555 million has already broken down a record 27 times since it was commissioned four years ago while a break down has been reported in the second phase also which is yet to be commissioned.

The Power and Energy Minister recently said in parliament that the plant failed 271 days out of the 1,086 days it was in operation.

The Lakvijaya coal power plant adds 300 megawatts to the national grid in the first phase and another 300 megawatts will be added in the soon to be operational second phase.
at January 29, 2014 No comments: 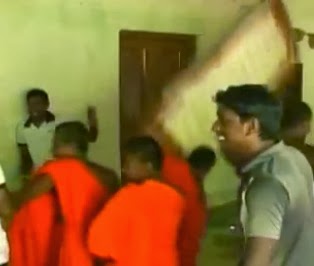 Eighteen persons including five Buddhist monks were produced in court today by police for their involvement in the attack on a Christian religious place. They surrendered to Galle magistrate court as they were wanted for ransacking two prayer centers of the evangelical Christian Assembly of God and Calvary Free Church at Southern Province tourist city Hikkaduwa.

However, the suspects were granted bail by the magistrate. They were released on Rs. 500,000 each personal surety by Galle magistrate Gunendra Kumara Munasinghe.

These suspects are to be framed charges on two counts pertaining to attacking two Christian religious places on January 12. The case was postponed to March 17.

Police identified 24 persons through video coverage of the violent carnage and court today ordered the police to arrest the suspects.


The monk-led mob resisted the police and destroyed the property hurling stones at the two prayer centers. The mob broke doors, windows and burnt religious signs and books.Local media videoed the violence and broadcast in the news on TV channels.


The Buddhist monks that led the protest said that the administrative authorities had ordered the prayer centers withdrawn. However, the pastors in charge of these centers said they were registered duly and the eviction order is illegal.

A special discussion on the fisheries problems of India and Sri Lanka will be held in India today with the participation of the officials and the representatives of fishermen from the two countries. 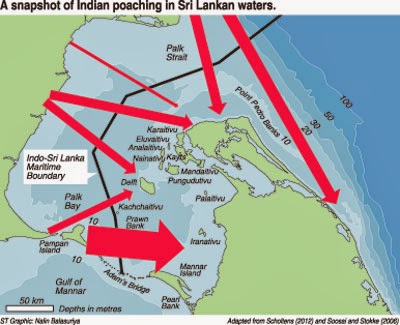 The discussion will be held on January 27 in Chennai Tamil Nadu. State officials and representatives of fisheries organizations of Sri Lanka and India will participate in this discussion.

The main focus of the discussion is preventing the Indian fishermen poaching in Sri Lanka's territorial waters and the Sri Lankans entering into the Indian sea territory.

The Director General of Sri Lanka Fisheries Department will lead the five member team of officials from Sri Lanka. Ten representatives from the fisheries organizations of Sri Lanka's Northern and Eastern Provinces will also take part in the discussion.

There is a long standing problem of fishermen of both countries poaching in waters belonged to the other side. Hundreds of fishermen are arrested by the authorities every year.

Meanwhile, Sri Lanka is discussing with the Maldives to seek a safe passage for Sri Lankan deep she fishing vessels to migrate to the international waters of the Arabian sea. At present Sri Lankan vessels endeavor to cross Indian waters to reach the Arabian sea for fishing amidst threats of arrest by Indian authorities.

Police submitted the report to the courts yesterday. According to the report 10 Buddhist monks are in the list of suspects who ransacked the property of two prayer centers of Assembly of God.

Buddhist Organizations in Hikkaduwa staged a protest in the area against Christian prayer centers operating in the region.

The monk-led mob resisted the police and destroyed the property hurling stones at the two prayer centers. The mob broke doors, windows and burnt religious signs and books.

Local media videoed the violence and broadcast in the evening news on TV channels.

The residents of these religious places were threatened and the police temporarily closed the main Galle Road as residents entered the Galle Road passing the Hikkaduwa town.

The Buddhist monks that led the protest said that the administrative authorities had ordered the prayer centers withdrawn.

However, the pastors in charge of these centers said they were registered duly and the eviction order is illegal.

The rising religious intolerance from extremist Buddhist monks-led organizations in Sri Lanka has raised alarms among the moderate public and if authorities fail to take adequate measures to curtail the violence the actions of thes extremist groups would have serious consequences, civil society leaders warn.
at January 17, 2014 No comments:

Giving is fun - An inspirational video

Giving whatever you have is nice way to receive happiness.

Click image to see it in full
Source: BestComputerScienceSchools.net
at January 04, 2014 No comments:

Sri Lanka police has arrested a senior police officer and his wife under suspicion of drug dealing.

The arrested police officer is an Inspector of Police. He is M.D. Munasinghe, the Officer-in-Charge of the Wellampitiya police station.

He and his wife are suspected of engaging in distributing drugs. Police recovered 26.5 grammes of heroin from the police officer's official quarters. The value of the cache of heroin is well over Rs. 150,000.

The police officer and his wife were arrested by the Police Organised Crime Investigation Division and detained till January 6 with the Colombo Crime Division (CCD) to be questioned over their involvement in drug trafficking, the CCD reported to Colombo Magistrate today.

Colombo Crime Division arrested the police inspector yesterday evening and arrested his wife also this morning via information obtained from three suspects who obtained about 25 grams of heroin from this police officer.