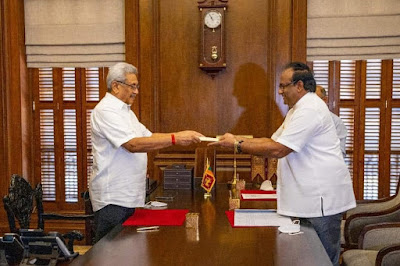 Arch Sinhala nationalist politician, former senior naval officer Sarath Weerasekara was sworn in as the cabinet Minister of  Public Security of Sri Lanka.
Rear Admiral Sarath Weerasekara, RSP, VSV, USP, MP holds the post of State Minister of Provincial Councils and Local Government also.
Under an extraordinary Gazette notification dated November 20, President Gotabaya Rajapaksa established two new cabinet Ministries and Public Security was one of them. The other is the Ministry of Technology.
Ministry of Public Security will be responsible for four institutions, namely, Police department, Civil Security department, Police Training College and the Multi-Purpose Development Task Force.
Police were previously trusted to the state Ministry of Internal Security, Home Affairs and Disaster Management held by President's elder brother Chamal Rajapaksa. His State Ministry was renamed today as State Defence, Home Affairs and Disaster Management and he was also sworn in the new title.
Sarath Weerasekara was a leader of President Gotabaya Rajapaksa's think tank Viyath Maga (The way of the Intellectuals). He elected to parliament in the 2020 August election achieving over 328,000 preferential votes, a number far ahead of the preferential votes gained by government and nationalist stalwart Wimal Weerawansa.
He first elected to parliament in 2010. In 2015, he was the only MP in the parliament to vote against the 19th amendment to the constitution.
Sarath Weerasekara is a film director too and directed Gamani in 2011.
at November 26, 2020