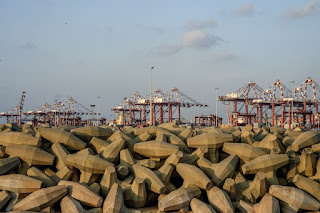 Sri Lanka has decided to vest in the development of the East Terminal of Colombo Port to India's Adani Ports and Special Economic Zone Ltd., a company of Adani Group belonged to billionaire Gautam Adani, reported Bloomberg website.

"Adani Ports and Special Economic Zone Ltd. and a local partner received an in-principle approval to sign a deal with Sri Lanka Ports Authority, which will hold majority stake in the project," the report said.

The preliminary agreement in regard to this deal was signed in 2019 with the involvement of Japan as well. India, Japan, Australia and the United States have joined together to deal power in the Indo-Pacific region and Sri Lanka is under pressure to select either to partner with them or to select China's Belt and Road strategy.

Before the parliamentary election in early August, the trade unions of Sri Lanka Ports Authority staged a protest demanding President Gotabaya Rajapaksa to deliver a written promise not to hand over East Terminal to any foreign country. The President promised to review the agreement but did not deliver the promise demanded by trade unions.

The trade union leaders suspended the trade union action and went to a stressful silence after a visit to meet the government leaders.

(Photo: Thanks to Bloomberg)