Sri Lankan family in Australia fight against deportation to stay 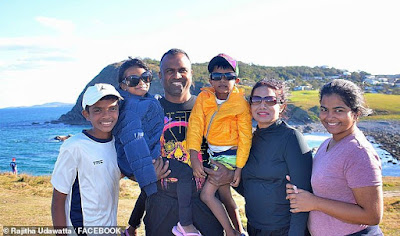 A Sri Lankan family whose temporary protection visas have since been rejected and appealed hit headlines of some of the Australian media due to the protests of their neighbours demanding let them stay.

Mechanic Rajitha Udawatta, the family's primary visa holder, passed away in September, leaving his wife Florence and three of their four children in a precarious position, Daily Mail Australia reported. Udawatta died due to bowel cancer the day after his 50th birthday.

The family do not want to return to Sri Lanka and their neighbours in Kempsey in New South Wales have rallied around their desperate fight to stay.

Udawatta's eldest daughter Hirushi, who is training to become a chef, is able to stay in Australia on a student visa. But Ms Udawatta will have to return to Sri Lanka with her other children Ruvish, 17,  Jeniffer, 8, and Duane, 7, if the family lose their appeal to stay.

"Family is here because we can't feel that we are Sri Lankans when we are here. We are just like Australians,"  Ms Udawatta said to Daily Mail Australia. "So, our dream is to stay here."

Raj Udawatta migrated to Australia in 2014 and his family joined him two years later. He was diagnosed with bowel cancer and passed away in September 2020.