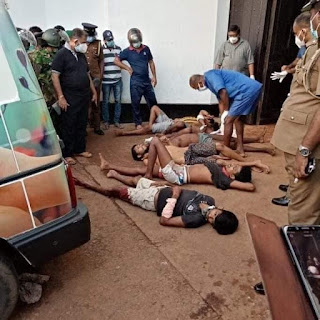 Criminal Investigation Department (CID) of Sri Lanka reported to Wattala Magistrate Court on December 18, 2020, that the postmortem reports of seven remand prisoners killed in Mahara prison would be submitted to the court on December 23. Five of these killed seven prisoners are COVID-19 patients.

CID cited that the postmortem had been delayed because of the cremation of four other prisoners was delayed. The postmortem of these four remand prisoners was conducted earlier and the cause of death was cited as gunshot injuries.

The prison officials shot at the prisoners but the Prisons Minister Lohan Ratwatta lied to media that no prisoner had died due to gunfire.

The lawyers appearing for the rights of the prisoners appealed to the court that the dead bodies of the slain prisoners buried but the CID objected it. The dead bodies were cremated later.

Chaos occurred in the congested Mahara prison in Gampaha district due to the fear of COVID-19. The prisoners demanded PCR conducted among them and the infected persons separated. Eleven prisoners were killed and over 100 were injured as a result of firing by the prison officers. PCR conducted later proved that nine of the 11 killed prisoners had been contracted COVID-19.

(Photo: A man suspected to be another prisoner deployed without personal protective equipment to attend to the dead bodies while the officials keep a safe distance)