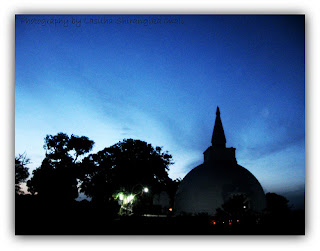 (May 11, Colombo - Lanka Polity) Sri Lankan W. Podi Appuhami, a 70 years old farmer of Welimada went to Somawathi in a goods transport truck to see the ancient pagoda emanate the light rays of Lord Buddha came home as a dead man. Media says that the man was killed when he fell from the lorry.

Forty two years old M.P. Lionel Samarawickrama of Galewela and 53 years old M. Karunawathi of Rajagiriya were dead in heart attacks at Somawathi. Media want to say that they were not killed in a stampede. But they could not be taken to a hospital due to traffic jam and torrential rains.

A stampede is a sudden, frenzied rush or headlong flight of a herd of frightened animals or people. The incident that took place in Sri Lanka's Eastern Province Somawathi is none other than a stampede although some elements are in need of hiding that reality. At least 25 people were injured in this stampede. Some are still disappeared.

This kind of accidents are rare in Sri Lanka. During war, people did not gather in such large numbers such as around 800,000 in more than 30,000 vehicles in a remote Buddhist shrine that is situated inside a forest reserve. This place is forest-locked and totally inadequate in facilities for such a huge crowd. The devotees were lured their by persons that publicized they would show the devotees the rays of Lord Buddha's body emanate from the pagoda there.

In Sri Lanka, there is a group of business minded persons that are disguised as monks that perform false miracles and attract crowds. They earn millions of rupees in hours by selling books, magazines, cassettes and CDs etc. to the crowd and even evade tax payments. The other religious businessmen that provide venues for these miracle performers also profit in various ways such as till and commissions from small businesses that sell various goods to the devotees.

These persons subtly manipulate media for their lucrative business and one can observe that they have already started false propaganda to hide themselves from the actual crime they committed and to mislead devotees further even before the dead persons were buried.

Many Buddhists that flock to see miracles do not know that Lord Buddha banned performing miracles for personal benefit.

Six years after attaining the supremacy, Lord Buddha stayed in Rajagahanuwara in the rainy season. By this time, a nobleman in the city that met with a Sandalwood trunk that came floating in a river made a bowl out of it. He placed it on a very tall post and challenged the monks in the city to perform miracle and take it. As all the other monks failed, a Buddhist monk called Pindola Bharadwaja took it.

When Lord Buddha came to know this incident, he banned performing miracles for personal benefit.