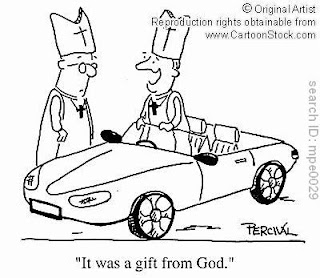 (June 01, 2010, Colombo - Lanka Polity) The reduction of duties on motor vehicle imports has pushed the law makers of Sri Lanka to exhaustion, sources say. The axe came as most of them were preparing to import cars for reduced taxes. Earlier the MPs could import a car once in five years totally duty free but now the government has planned to impose a tax of around 15%.

it is open secret that most of the MPs either ruling party or opposition sell their vehicle permits to a handsome easy income that ran into several millions of rupees. With the reduction of taxes bt 50%, the MPs also lose half of their quick bucks from vehicle permits.

The government reduced the excise duty on imported vehicles by 50% and removed a 15 percent surcharge on all imports while reducing duty on electrical appliances since June 01.

With effect from yesterday, a car such as an Indian-made Maruti, which had attracted excise duties of up to 183% of its value, would now be charged a duty of 90%, Director General of Fiscal Policy S. R. Attygala said.

The government hopes the tax cuts will pick up the imports and help revive revenues which had suffered due to high taxes last year. The trend was out in the open in Colombo Bourse in which the share prices of companies importing motor vehicles were upbeat.

The finance ministry in a report issued under country's fiscal responsibility law in February said excise taxes on motor vehicles alone which had been 18 percent of the total in 2007 had fallen to 3 percent by 2009.

In November 2009 vehicle registrations had stabilized at 19,300 but cars had plummeted further to 329.

(May 28, Colombo - Lanka Polity)  Sri Lanka President has proposed to levy a tax of 18% to 20% from the parliamentarians privileged so far to import vehicles once in five years.

This proposal appears outwardly as a progressive move although it actually increases the amount of taxes the politicians can evade. On the other hand, it will also provide an argument for the rulers to rationalize increase of taxes.

An MP can import a vehicle that is close to the market value of Rs. 20 million in Sri Lanka. It is a public secret that many MPs sell the licence to import a vehicle tax free and pocket a handsome income scot-free.

Average citizens of Sri Lanka have to pay more than 100% tax for motor vehicles. In some instances the tax is close to 200%.

High taxes on buses cause lack of development in Sri Lanka's public transport.