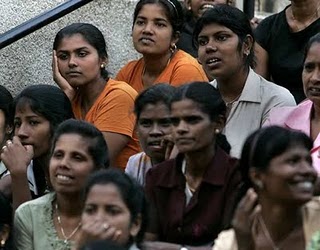 (May 01, Colombo - Lanka Polity)  The working class of Sri Lanka is facing the harsh reality of the rulers they secured in power even before a month passed after they swept Mahinda Rajapaksa regime into the parliament with a close to two third majority.

But, the state-run media brightened the spirits of the voters by igniting the hopes of important statement from the government on May Day. Working class had hopes in the back of their minds that the government would not totally forget them.

Now, all hopes are gone. The hyped salary increase for the employees that come under the Wages Board control is also proved a fraudulent propaganda piece.

Marcus also said that of the above 4.5 million private sector employees of the country, only 2.5 million are subjected to the Wages Board wage control. Twenty million have been totally left out, he says.