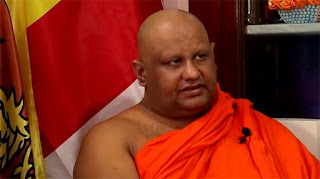 President of Sri Lanka, Gotabaya Rajapaksa pardoned a criminal Buddhist monk who had been jailed for life for possessing two T-56 firearms and 210 numbers of live ammunition illegally.

Another monk and three former supporters of Karuna faction broken away from Liberation Tigers of Tamil Ealam were also arrested. The Attorney-General withdrew the charges against them in June 2018.

After a lengthy hearing, Colombo High Court Judge Adithya Patabendi sentenced him for a lifetime rigorous imprisonment on 01 June 2020. He was forced to remove his robe and wear the prison jumper.

Diana Gamage, a national list MP of Samagi Jana Balavegaya led by Opposition Leader Sajith Premadasa, recently appealed to the President to pardon Uwathenne Sumana Thero. Diana Gamage crossed over to the government and voted in favour of 20th amendment to the constitution going against the party decision.

Sumana Thero had appealed against the judgement against him before the appellate court. He was pardoned under the condition of withdrawing the appeal.

Analysts believe that the pardoning of this Buddhist monk who had politically supported the opposition was a precursor for pardoning Duminda Silva, the former ill-famous politician now condemned for the murder of Bharatha Lakshman Premachandra. Duminda Silva is the brother of Raynor Silva, the owner of ABC media network which is a major propaganda tool of Rajapaksa regime.