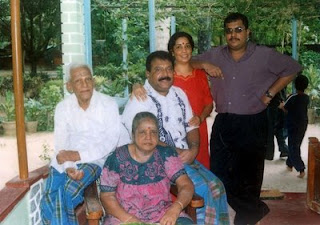 (May 13, Colombo - Lanka Polity) Seventy nine years old Parvathi Velupillai is a partly paralyzed, diabetic, hypertension patient. she, the widow of a late junior public servant of Sri Lanka that hailed from an ordinary family of Velvetithurai, Jaffna was (would you believe?) a threat to national security of mighty India, that boasts about the forth biggest Army of the world.

This woman lived with her husband for nearly two decades in India without being a security threat before 2002.

She is the mother of the slain leader of the Liberation Tigers of Tamil Ealam (LTTE) Velupillai Prabakaran. While the Sinhala polity celebrates the killing of her son an year ago, ending a three decade of bloody war, this sick woman has been admitted to Velvetithurai hospital in Jaffna with a minor paralysis in her body, said a medical officer of the hospital.

Mrs. Parvathi was brought to India from Malaysia for treatment few weeks back but India denied her entry on the basis she was a threat to national security. Later, with the intervention of the Tamil Nadu government she was offered conditional visa to admit into a hospital in Chennai.

However, former Jaffna district Tamil National Alliance (TNA) MP M.K. Sivajilingam, a close relative of Prabakaran’s family said that she was admitted to the hospital of her home town on the request of the family members.

India gave refuge to a young Prabakaran in her soil when he was a busy young man organizing a violent movement for national liberation of Sri Lankan Tamils. The war in Sri Lanka led to a massive outflow of Tamils to developed West and a Tamil Diaspora was formed. It pumped blood to the LTTE that played a vibrant role in global politics although it was a banned terrorist organization in many countries.

Sri Lankan Tamils were always on the lookout for the good of the international community to save them from the Sinhalese they branded as evil-minded and hell-bent on hunting the Tamils. For them, Sinhala polity was a single unit of oppressors. Their strategy forced them not to look beyond that. There were some good individuals among Sinhalese, but the polity is wicked to them as a whole, they propagated.

Now, their slain leader Prabakaran's paralyzed mother cannot actually find a hospital bed from the societies they thought they would find good someday.

Eventually, it is Velvetithurai, her village by the sea in Jaffna peninsula that is now a military colony guarded by Sinhala soldiers, seems to be the place where she can lay to rest one day as same as many thousands of other Tamil men and women did without leaving tombstones.

Once and for all, Tamils have been disillusioned another time by the so-called saviors in the international community and the Tamil, Sinhala polities sit face to face once again with eyes full of hatred. Following three decades of war, we have again come to the starting point. There is no one to save us. We the Sri Lankans have to find a way to share this country respectfully without fighting.