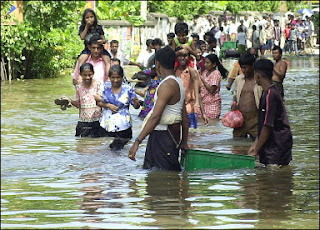 (May 20, Colombo - Lanka Polity) Sri Lanka Ministry of Irrigation and Water Resource Development has taken swift action to identify land to resettle the dwellers of canal banks in Colombo city. Most of these canal side dwellers are displaced now due to floods.

While the Minister of rrigation and and Water Resource Development is attending in the World Health Assembly in Geneva, the Secretary of the Ministry Ivan de Silva says that the land is being identified now on the instructions of the President Mahinda Rajapaksa. He said that the President instructed the officials to find them land close to Colombo city.

Perhaps the President might have understood that these people had dwelled in the city for a long time and their livelihoods are connected to it. Most of the people of these low income groups render a yeoman service in city cleaning and other services hard work is needed. Nice words of the President we have to wait and see the realization. Hope the 30,000 plus families now in camps will not be chased away when they go back to their houses once the floods recede.

Colombo Municipal Council Chief Engineer said recently that the sudden flow of water due to downpour is beyond the capacity of drainage channels of the city. The drainage system of Colombo city was constructed by British colonial rulers in 1910 and it has been used with slight improvements.

The unauthorized slum dwellers on canal banks actually contribute to pollution and blockade of water flow in canals while living in most unhealthy conditions. They are needed to be resettled in better places with better livelihoods for them.

But, the government has to really show that it is going to uplift their lives. This should not be another action similar to the uprooting of Colombo payment hawkers without providing them alternative to make a living.

Sri Lanka government is busy in its attempts in making Colombo city attractive for tourists and foreign direct investors. In this process, the government has forgotten the basic fact that Colombo is a traditional native place of diverse communities. Colombo is not only buildings and roads. Colombo residents and other people are also a part of Colombo. Developing Colombo should be developing its people too. Real city beautification is beautifying the lives of the city dwellers, especially the poor masses, whom the government always claims to be representing.

In her book THE SHOCK DOCTRINE, Naomi Klein explodes the myth that the global free market triumphed democratically. Exposing the thinking, the money trail and the puppet strings behind the world-changing crises and wars of the last four decades, The Shock Doctrine is the gripping story of how America’s “free market” policies have come to dominate the world-- through the exploitation of disaster-shocked people and countries.

"At the most chaotic juncture in Iraq’s civil war, a new law is unveiled that would allow Shell and BP to claim the country’s vast oil reserves…. Immediately following September 11, the Bush Administration quietly out-sources the running of the “War on Terror” to Halliburton and Blackwater…. After a tsunami wipes out the coasts of Southeast Asia, the pristine beaches are auctioned off to tourist resorts.... New Orleans’s residents, scattered from Hurricane Katrina, discover that their public housing, hospitals and schools will never be reopened…. These events are examples of “the shock doctrine”: using the public’s disorientation following massive collective shocks – wars, terrorist attacks, or natural disasters -- to achieve control by imposing economic shock therapy. Sometimes, when the first two shocks don’t succeed in wiping out resistance, a third shock is employed: the electrode in the prison cell or the Taser gun on the streets." (http://www.naomiklein.org/shock-doctrine)

Beware! Talks about resettling Colombo canal bank dwellers that are now displaced due to floods can also be a move of this disaster capitalism.