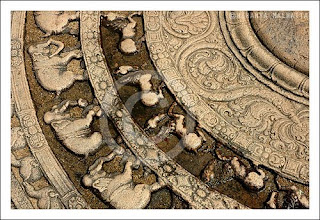 (November 13, Colombo - Lanka Polity) A new sandakadapahana or moonstone has been recovered from the ancient Anuradhapura city. Sandakadapahana is a unique stepping stone with artistic carvings on it and it was widely used at the entrances of the shrines in Anuradhapura era that spans up to 10the century AD.

However, the recovery had been made spontaneously as a base pit was dug to build a shrine near the ancient Sri Maha Bodhiya, the sacred bo tree believed to hail from the tree that provided shade to Lord Buddha..

The sandakadapahana was observed significant in its artistic and archaeological value.

However, the Department of Archaeology has decided to bury this invaluable monument as it was until a systematic archaeological excavation is carried out.