Sri Lanka President to hold general election prior to presidential 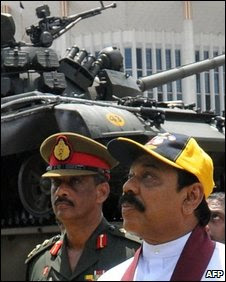 (November 17, Colombo - Lanka Polity) Sri Lanka President Mahinda Rajapakse who earlier wanted an early presidential to extend his term for eight more years manipulating the popularity he earned via the victory over the Tamils' violent struggle for homeland is now changing his mind, sources say.

The President is likely to postpone the presidential and the parliamentary elections are to come soon as the term ends in April next year.

The President anticipated a one horse race with the shattered opposition until the former Army Commander General Sarath Fonseka who was a kingpin of the government's war victory came into the scene as a possible common opposition candidate in an upcoming presidential.

Fonseka retired from the post of Chief of Defense Forces on November 16. He said to media that he would expose his plans for future within a couple of days.

Major opposition United National Party (UNP) and Marxist nationalist People's Liberation Front (JVP) have pledged conditional support to Fonseka and both parties have sought the abolition of the executive presidency. However informal sources say that Fonseka has asked for a period of two years to go before the abolition of the executive presidency.

However, with the possibility of holding a general election before the presidential, Fonseka, the UNP and the JVP will have to rethink their strategies. At the moment, Sarath Fonseka appears more popular than the President, according to an online survey conducted by our sister Sinhala website www.w3lanka.com.