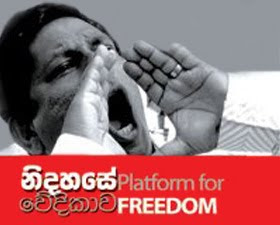 (November 11, Colombo - Lanka Polity) Platform for Freedom, a civil society movement in Sri Lanka has organized handing over of declaration titles Commitment for Change to the leaders of the newly formed United National Alliance on 12th November 2009 in a ceremony to be held at the Jayewardena Centre, Colombo07.
The Leaders of the UNF including Opposition leader Ranil Wickramasignhe, MP Mangala Samaeaweera, MP Rauf Hakeem and MP Mano Ganesan are expected to participate.

Platform for Freedom announced "The Declaration was discussed at district level delegates’ conferences before finalizing. The programme of action to rebuild the country and transform the governance process will be based on the 5 precepts contained in this document."

Convener Attorney J.C. Weliamuna states that this document will be presented to the Tamil National Alliance, the United Socialist Party and the Janatha Vimukthi Peramuna at a subsequent day as the Platform for Freedom is calling for the formation of a broadest people’s coalition for democracy.

Email ThisBlogThis!Share to TwitterShare to FacebookShare to Pinterest
Labels: Platform for Freedom