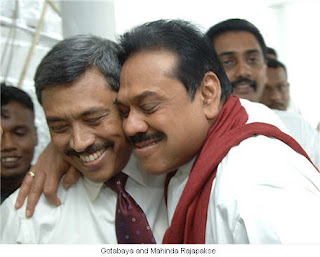 (December 14, Colombo - Lanka Polity) Canadian Tamil Congress spokesman David Poopalapillai told IANS that the Tamil diaspora around the world is writing to the UN, the International Court of Justice and world leaders to put the Sri Lankan president on trial immediately.

"We are drafting our petition and will send it soon to the world leaders, including Canada and India, to put Mahinda Rajapaksa and his men in the dock for war crimes,'' he said.

"What more proof do world leaders and the international community now need to try the Sri Lankan president and his men for crimes against humanity?'' he asked commenting on Sri Lanka's ex-Army Commander Sarath Fonseka's statement to The Sunday Leader that Defense Secretary Gotabhaya Rajapakse, a brother of President Rajapakse, ordered to kill the Tamil rebel leaders that came with white flags to surrender.

"Rajapaksa is a war criminal. He should be taken to The Hague to face trial for war crimes. No nation has violated the Geneva Convention as flagrantly as Sri Lanka. No nation ever killed the surrendering enemy.''

Meanwhile, Sri Lanka President Mahinda Rajapakse said yesterday (14) that he was ready to go to gallows on behalf of the 'war herpes'.

Fonseka named Sri Lanka Army Major General Shavendra Silva, a Brigadier who was leading operations under Fonseka, as the person of reception of the killing orders of the Defense Secretary.

Defense Secretary Gotabhaya Rajapakse is a US citizen.

The majority Sinhala community respects the military and political leadership alike that crushed the violent armed struggle of Tamil nationalists. They vehemently oppose power sharing and want to maintain the Sinhala dominance in state apparatus. Liberation Tigers of Tamil Ealam (LTTE), a rebel movement that had a de facto state in Northern and Eastern parts of the island was militarily defeated and almost all leaders were eliminated in the military operations that ended in May 2009 with the victory of the state Army.

University Teachers for Human Rights (Jaffna), an independent human rights organization in the Tamil polity in Sri Lanka stated in a recent report "for both parties, the key to military dominance lay not in brilliant strategies, but in an utter disregard for the lives of civilians and combatants alike, driven by their leaders’ single-minded pursuit of personal power."