Police to save Sri Lanka President's family goodwill; no police can protect your good name but yourself sir 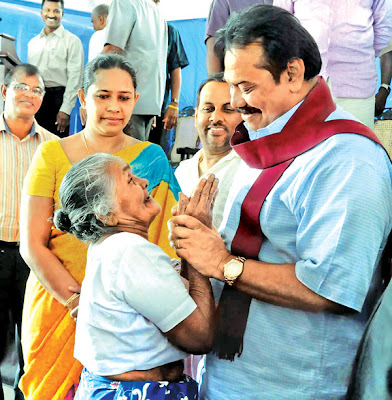 (March 05, Colombo - Lanka Polity)  Media reports say that a special police team of investigation has been appointed to probe the complaints received by the police headquarters regarding several organized unscrupulous groups that are engaged in frauds covering to the good names of the members of the ruling Rajapaksa family.

According to reports, these groups have used the names of President Mahinda Rajapaksa, Defense Secretary Gotabhaya Rajapakasa and the Chairman of the Tomorrow for Youth Namal Rajapaksa and police have begun investigation since yesterday. Basil Rajapaksa's name was not in reports.

Police headquarters says that has received a complaint regarding a shocking incident of a person appearing a close associate of the President’s son Namal Rajapaksa molesting a young woman in addition to swindling Rs. 4.5 million promising to purchase a motor vehicle tax free.

Police says that this organized group has cheated money from people promising employment, land deals etc. using the goodwill of the President and his immediate family.

Rajapaksas have to think seriously about why this happened. No police can protect what they can do for themselves.