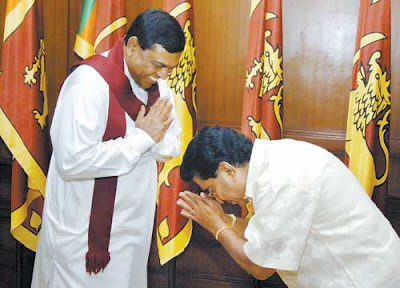 (March 10, Colombo - Lanka Polity)  Sri Lanka Minister of Labor Dr. Mervin Silva proposed the parliamentarians on March 08 not to withdraw this month’s salary because the parliament met only for one sitting this month.

He made this proposal during the debate for the extension of emergency regulations declaring he would not withdraw his salary this month since the parliament met for only one sitting this month. He asked all MPs to sacrifice their monthly salary to the nation in order to strengthen the President’s hands in developing the country.

The President dissolved the parliament on February 08 and called for elections. The elections are to be held on April 08. But later the parliament was reconvened to approve the proclamation signed by President Mahinda Rajapaksa on March 1 extending the emergency state for another month.

The parliament is to meet again on April 06 two days ahead of the general election with the same purpose. For four consecutive months, the parliament of Sri Lanka is meeting with the sole purpose of extending the emergency state. What a ridicule to a parliamentary democracy!

The response of the MPs to Mervin Silva's proposal was not available immediately.

However, the Sri Lankan public are likely to lose this wonderful Minister in the next parliament that meets on April 22. Mervyn Silva yesterday vowed in Parliament that he would not attend the sessions of the next Parliament if at least a single member is elected to Parliament from the ‘Trophy’ symbol at the upcoming general election.

Responding to a statement made by JVP MP Sunil Handunetthi, Minister Silva said that none of the candidates contesting under the ‘Trophy’ symbol would be elected to the next Parliament.

If Minister Silva will not attend the parliament for three consecutive months, he will be considered vacated the post. He has not declared if he will not withdraw the salaries of these three months.

We beg Dr. Mervin Silva to change his mind. Please sir, your stay is a must. Parliament is a place that provides jokes as well to this marvelous polity.