What play does Sri Lanka have in between Russia and Ukraine? 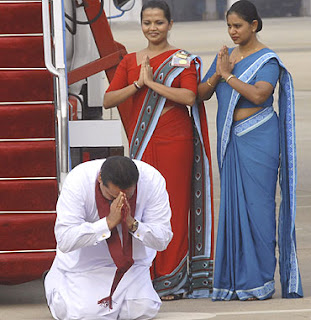 (June 29, 2010, Colombo - Lanka Polity) Sri Lanka President Mahinda Rajapaksa is to leave for an official tour in Ukraine today. The official visit is scheduled from June 29 to July 2, 2010,

This is the first time a Sri Lankan President and a state head of the South Asian region pays an official visit to Ukraine, local media reported.

The Sri Lanka President is to hold bilateral talks with the Ukraine President, Prime Minister and senior state officials.

Director of the Ukrainian Foreign Ministry's information policy department Oleh Voloshyn said to Ukraine's leading English-language newspaper Kyiv Post that it would help promote a bilateral political dialogue at the summit level, further developing cooperation between the two countries in the fuel and energy, military and technical, education, and culture and humanitarian spheres.

A range of bilateral agreements, in particular, on cooperation in the tourism and military and technical spheres, are to be signed during the visit, said Kyiv Post.

Ukraine assisted Sri Lanka immensely in the latter’s war against terrorism. However, Ukraine has disputes with Russia, another ally of Sri Lanka. Russia recently raised voice against the panel appointed by the UN General Secretary to advise him on human rights issues related to Sri Lanka.

Russia opposes Ukraine's move to join NATO. Sri Lanka is also in a tug-of-war with EU over the GSP Plus tariff concessions granted by the latter to poor countries. Sri Lanka is unwilling to bow to EU pressure on ratifying UN conventions regarding human rights.