What victory are we celebrating in Sri Lanka? 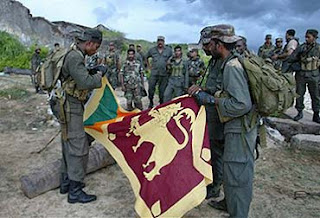 (June 18, 2010, Colombo - Lanka Polity) Sri Lanka celebrates the war victory marked by killing of Tamil rebel leader Velupillai Prabakaran on May 18, 2009 a year and a month later. The victory celebrations were postponed a month ago since the floods displaced around half a million people, a large number from Colombo itself.

Yesterday an ethnic Sinhala man was arrested by police for enlarging a photo of Velupillai Prabakaran. Police intelligence officials are now interrogating him to identify may be his mindset. It seems having a photo of Prabakaran in possession a sin if not an offence in post-war Sri Lanka.

It is not a bad idea giving another holiday to Sri Lankan workers. But, the government need to tackle the issue of a large number of employees especially in the public sector idling on working days as well.

Even an year after the war, the only change perceivable in Sri Lanka is the relative peace of being free from frequent bomb explosions. Ethnic polities are still as much divided as they were in the war time.

No person with a sense can say that the country is in the path of development about which the government boasts. No serious rapid growth of investments and growth of tourists that will be effective to achieve the goal of being Asia's Wonder.

One thing happening in Sri Lanka is the development of infrastructure with the funds raised from the open financial market at relatively higher interest rates. Massive rackets of commissions and other malpractices haunt this 'development.'

The nation is entangling in a crisis of debt day by day.

The most crucial issue of Sri Lanka at the moment is the number of terms the President can hold the post and the successor of President Mahinda Rajapaksa, either his son or one of his powerful brothers.

We, the Sri Lankans, have got up late on Wednesday and in front of the television watching the victory parade lazily sipping tea.