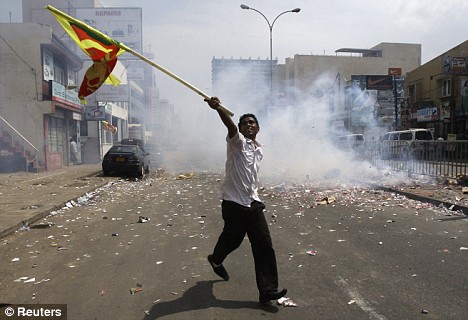 (August 29, 2010, Colombo - Lanka Polity) Working class of Sri Lanka is facing new challenges following the defeat of the Tamil liberation struggle and the capitalist re-unification of the state structure.

In the latest development, the garment factory owners struggling to survive amidst the loss of GSP Plus tax concessions from European Union are in a mass recruitment drive of Tamil girls among IDPs for cheap labour in factories.

Anton Marcus, President of the Progressive Free Trade Zone and Apparel Union told the Sunday Times, “After many years of war, the people in these areas are ignorant of workers rights, wages and so on and are easy prey for the apparel operators. Most of the big names currently touring the north and east are known to be serious violators of labour laws. There is a huge dearth of factory hands at the moment because many are leaving owing to poor wages and working and living conditions. Therefore the apparel bosses have switched to the north and east where there is widespread unemployment. These people are willing to work for any wage and they care less about the working or living conditions. At the end of the day, these workers will be exploited.”

The trend recalls the history of colonial planters importing low-income group people from South India as plantation workers in the 19th century. Poverty stricken Sinhala villagers that lost their traditional livelihood due to land grab of the colonial companies grew a deep rooted jealousy and hatred with the Indian workers and it still prevails even more than 60 years after gaining independence. To appease them, Sinhala rulers took back the citizenship right of these Tamil workers and deported thousands of them against their wish. Indian origin Tamils are still struggling far behind the other communities to achieve due equality.

The cheap labour available in recently re-unified areas of Sri Lanka may have a greater impact on Sri Lanka's labour market in recent future with the revocation of restrictions of mobility that were imposed on security concerns. Even now, the cheap labour from the workers of minority communities have changed the labour terrain in rice cultivating districts like Polonnaruwa.

This can cause a new challenge to the workers' movements since there is a possibility of emergence of a new wave of racism among workers that clash in labour market for better demand for them. Similar riots took place in some states of India in recent times.

Another kind of manipulated labour migration is also visible in re-unified areas. The state and private companies that carry out development projects in Northern Province take labourers from south to north due to security and other issues instead of recruiting labourers from IDPs.

Media reports say even India is to bring a 20,000 workforce to Sri Lanka to employ in the 50,000 numbers mega housing project for IDPs of Northern Province.

Less attention is paid both by Sri Lanka and India regarding the feeble voice of the IDPs demanding employment in these development projects.

Governments are yet to identify that they are providing breeding grounds for fragmented Tamil nationalist forces that are manipulating the situation to revive Tamil racism among IDPs.