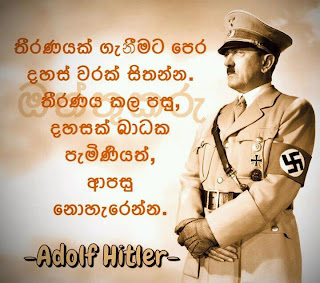 I found this banner shared by one of the students of my school. He is a handsome, pleasant kid of around 18 years of age who belongs to the Sinhala community.

This boy is a prefect of the school and also a scout of a highest medal.

He is a very polite, decent and lovable guy. In the multi cultural school he learns, I have never seen him behaving disrespectfully to the teachers or the students that belong to other communities.

He is a friend in my Facebook and I have observed that the majority things hat he shares there are extremely racist especially against Muslims.

I once invited him to have a chat over a cup of tea regarding our opinions on ethnic relations which are worlds apart. He readily accepted the invitation to come to my house but we both were busy in the past weeks, he getting ready to sit for the G.C.E. (Advanced Level) examination in August in science stream.

"I know your views Sir, but it doesn't matter, let us talk," I remember he said.

Yesterday, he had shared this banner.  I still like him very much but I can't understand what has happened to boys like him.

Thirty years back, when I was in his age, I too was extremist.But if there was Facebook I might have promoted Che, Bob Marley, Marx, Engels, Lenin etc.

But he is promoting Hitler. I don't know what to say.