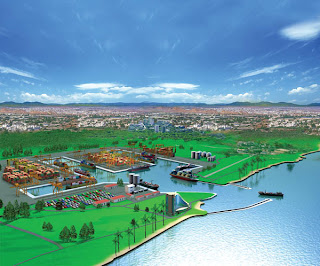 FRIDA GHITIS | 02 SEP 2010WORLD POLITICS REVIEW
COLOMBO, Sri Lanka -- On a steamy afternoon in the Sri Lankan capital, if you glance across the water at Colombo's legendary Galle Face Green seaside promenade, past the spray of the Indian Ocean, you can make out a milky line of giant cargo ships at the point where the sky blends with the sea. That ocean traffic on the horizon, those dashes of gray steel, glide along the world's busiest sea lane, navigated by anywhere from 100 to 200 ships every day. This is the maritime pipeline that makes it possible for China to remain the world's fastest-growing economy. It is also the visible explanation for China's generosity toward Sri Lanka and a centerpiece of this country's vision for the future.

Sri Lanka, the small tear-shaped island at the foot of India, has always held a special place in the hearts of global strategists. In earlier centuries, Portuguese, Dutch, and British colonial invaders sought to exploit its riches, but they also coveted the island for its location. Now, in what may become the Chinese Century, it is Beijing that has its sights on the country formerly known as Ceylon.

China's interest has been warmly reciprocated by Sri Lankan authorities, who see Beijing's embrace as the key to prosperity at a time when the West demands pesky human rights standards in exchange for its largesse.

While the West today is removing preferential trade treatment from Sri Lanka, citing its failure to cooperate with human rights investigations, Beijing is happily expanding its presence. Last year China became the country's biggest financial investor, and the level of cooperation is increasing by the day. Chinese businessmen and technical experts are a regular presence in Colombo's hotels, and government delegations make frequent visits. China is allowing Sri Lanka to develop its economy, while Sri Lanka is providing China with a key strategic position in the Indian Ocean -- one that could evolve into a political and even a quasi-military alliance.

Sri Lanka has become one of the beads in China's so-called "String of Pearls," a series of ports between the Persian Gulf and China that protect Chinese trade routes and create the foundation for what could become a series of bases for China's fast-growing navy.

In order for China to access the Middle East oil that fires the pistons of its economy, freighters carrying petroleum must slice through the Persian Gulf waters, sail within sight of Sri Lanka's shores, and make their way around Southeast Asia until they reach a Chinese port. Similarly, Chinese exports destined for Europe must reverse the route, passing near Sri Lanka on their way to the Red Sea, the Suez Canal, and the Mediterranean Sea. Freighters headed to the east coast of the United States, where hungry American consumers gobble up Chinese products, continue on to the Atlantic Ocean.

The Chinese presence in Sri Lanka has become inescapable. Strong bilateral relations are nothing new, but the ties have strengthened greatly since Sri Lankan President Mahinda Rajapaksa came to office five years ago, and even more since his forces won an apparently decisive victory in the war against the separatist LTTE, the Liberation Tigers of Tamil Eelam.

That military victory against an organization that perpetrated acts of extraordinary brutality was widely cheered by Sri Lanka's majority Sinhalese -- as well as by large sections of the minority Tamil, who dreaded the extreme methods of the Tamil Tigers and breathed a sigh of relief at the war's end. But the victory came at a horrific cost to civilians.

As the controversial final offensive pushed relentlessly ahead last year, China blocked efforts to bring the matter to the U.N. Security Council. But China was already on its way to forging the alliance years earlier. In 2007, when Washington stopped direct military aid to Colombo on human rights grounds, China quickly picked up the slack, providing powerful new weaponry that made America's decision irrelevant. Chinese weapons played an important role in the government's ultimate success against the LTTE in 2009.

Sri Lanka has resisted international pressure to open itself to human rights investigations about what transpired during the final months of the war, when hundreds of thousands of civilians were displaced and thousands more are believed to have been killed. The U.N. launched such an investigation, charging some 7,000 civilians died as the fighting reached its final climax.

In order to pressure Colombo to allow a war crimes probe, the European Union last February threatened to remove favorable trade status. The threat failed to change the government's stance, and in August, Sri Lanka lost tariff preferences under the union's so-called Generalized System of Preference Plus.

Sri Lanka remains defiant in the face of Western pressure, partly because China's help is easing the pain. Authorities say the country received $1.2 billion from China in 2009 in the form of grants, loans and credits, constituting the majority of what Sri Lanka received last year and making Beijing easily the largest contributor among foreign countries and multilateral agencies.

Chinese funds built the gleaming convention center near the airport, but the most important project for both countries is the one under construction in the south of the island. The Hambantota deep-sea port, whose first phase was recently completed, is one the largest of China's String of Pearls ports. Its 55-foot depth makes it one of the deepest in the region. The joint venture, expected to cost $1.5 billion, will give China a place to dock its most massive ships and provides Sri Lanka with an opportunity to expand its position in international shipping. Sri Lanka aims to lure large ships traveling between Asia and the West to use the port for refueling and maintenance.

Other Chinese projects in Sri Lanka include a major power plant in the town of Norochcholai with a price tag of $1.35 billion, financed by Exim Bank of China. The first phase of the plant already went online. China is also engaged in a number of crucial and costly road-building projects, including one that would cut the travel time between Colombo and the main airport at Katunayake to about 20 minutes. It now takes between one and two hours, depending on the capital's unpredictable traffic congestion.

For Sri Lanka, the end of the war with the Tamil Tigers means a new era. Pressure from the West to look back at what transpired during the conflict, or at the cost civilians paid for that victory, are seen by the government as an affront to its sovereignty and an unnecessary rehashing of a necessary war. Instead of looking back, it prefers to look to the future. And a big part of the future can be seen from the country's shores, where the big Chinese ships dotting the horizon symbolize new opportunities for Sri Lanka.