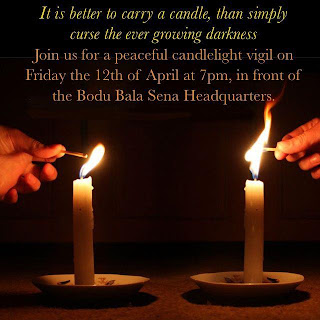 A a peaceful candlelit vigil was planned to be held on Friday 12 April at 7 p.m. before the Sambuddhathva Jayanthi Mandiraya, a Buddhist center built with the funds raised from the peaceful Buddhists and later converted to the de facto headquarters of the violence mongering Budhist terrorist group Bodu Bala Sena (BBS).

This seems the first political campaign organized by a Facebook Group in Sri Lanka. The breakthrough event organized and participated by the anonymous, middle class looking Colombo people was disrupted by the violent mobs of the BBS who were supported by the police.

Arguments of BBS spokesman Dilantha Vithanage and others in the mob who came out of the Sambuddhathva Jayanthi Mandiraya was extremely ridiculous.

Vithanage said he had not seen any of the peaceful protestors in temples and therefore they cannot be Buddhists. They also asked the peaceful activists to light coconut oil lamps instead of candles if they are Buddhists. They wanted the anonymous demonstrators be arrested by police since no leader appeared.

A similar set of sugar coated ridiculous arguments against the vigil could be seen published by the The Nation editor-in-chief Malinga Seneviratne.

The arguments though appeared foolish reflected the real causes that shook the racists and their regime. People have begun to use new technology and methodology in resistance that out pours from cyberspace to streets. The racists may not be afraid to the Sri Lankan orgin NGO and Diaspora campaigners in foreign soil that make their living through their protests. Yet, these are the Lankans that struggle to make this country a better place for all communities to live in peace. That is why they are hated so much. They are trying to curb this potential challenge at the roots.

Police+BBS led disruption of the event was not actually a defeat. Comrades, you have marked a new beginning of struggles for justice in this island.

Here's their community - A place to discuss the Bodu Bala Sena's actions, techniques, motives, and goals, and question whether they are in line with the Dhamma.May more such groups be created and make right people courageous to come to street to fight against the rising wave of hatred.
- Ajith Perakum Jayasinghe


Two interesting articles on the topic can be read from these links.


The BBS ‘Buddhists’, ‘Nightclub Buddhists’ And The ‘Vigil’ That I Saw by Malinda Seneviratne and a reply to him by Dayan Jayatilake Anti-BBS Vigil: A Critique Of The Critique