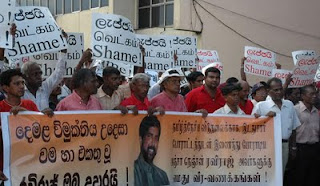 The alliance is still in its infant age. However, the minority alliance seems to miss the Upcountry Tamils mostly looked down on upon by the elite Tamils due to their Indian origin and the low economic situation. Petit objectives of the minority leaders as well as the personality clashes must not interfere in this alliance formation since the broadest the alliance it is the most strong before the increasingly dominating Sinhala rulers..

On the other hand, the minorities need to open their eyes to see beyond their own nationalist narrow scopes to see how many Sinhalese have fought for the rights of the minority communities in this land. In the recent past, almost all Tamils were in the hands of either the LTTE or the Sri Lanka Government that waged war either for a Tamil Ealam or a Sinhala chauvinist Sri Lanka. The only alternate views were with the leftists and the social activists of Sri Lanka that were firm on their anti-war stand and on the basis of respecting the minority rights. The majority of the left is ethnically Sinhala although it is not worth mentioning for the leftists who prefer to consider them as internationalists.

Sinhala polity is not one single unit of ethnic chauvinists. The voice of the ethno-socialists were suppressed by the government in a brutality matched with that released against the Tamil bationalists. However, still these anti-war activists are active in Sri Lanka. For instance, who are campaigning for the release of Tamil journalist J.N. Tissainayagam who was sentenced for 20 years rigorous imprisonment for abetting terrorism, as he was charged by the state. Many of the brilliant leftist thinkers and social activists underwent severe difficulties in their struggle for peace among national polities stubbornly unyielding to the current of Sinhala ethnic supremacy in the state.

Sri Lanka's oppressed minority polities cannot win their rights through sheer minority nationalism. The effort for uniting the Tamil speaking Muslims into the Tamil speaking polity is a very positive move especially in the aftermath of the LTTE's arrogant anti-Muslim policies. In the context of the long term defeat of militant Tamil Ealamism, the best option the minorities can select is fighting for a Lankan nation that integrates the Sinhala, Tamil and Muslim polities in an honorable state framework together with other minorities. A slogan of building a Lankan socialist state can unite oppressed nationalities as well as the oppressed classes and sexes etc. . 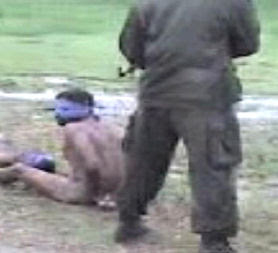 The relevant video, said to be recorded in January this year was given to Channel-4 by a new media group called Journalists for Democracy in Sri Lanka (JDS). JDS was formed in July this year by a group of media persons exiled in various countries. The group said in a press release that more than 50 Sri Lankan journalists are in exile. A large number of them are the majority Sinhalese journalists that were sympathetic towards the right of self-determination of the Tamils. The group did not declare the names of the leaders but the government says that a Sinhalese newspaper editor that is in exile in Germany is the leader of this organization. The government also links JDS to the Tamil rebel Liberation Tigers of Tamil Ealam (LTTE) international wing.

The video shows Sinhala speaking personnel clad in Sri Lanka Army uniforms execute persons suspected to be ethnic Tamils. Channel-4 said that it could not verify the authenticity of the video while the JDS later said that it was given to them by an Army official.

The government says the video is doctored and the state troops has never engaged in executing people. The Foreign Ministry summoned the Colombo diplomats to clarify that the video is fake. Indicating the reports of the volunteer and hired experts the officials said that the video was not recorded in a mobile phone. It further said that the sound track in which Sinhala utterances can be heard was dubbed to the video separately. The gunshot was heard extraordinarily late and the way the deceased fall, the blood marks and a number of other movements are not genuine, they pointed out.

Several childish arguments set forth by the state officials were proved false by JDS in a later programme of Channel-4. They showed pictures of Army officials wearing white T-shirts under their uniforms although the government said the soldiers wore only the green color T-shirts. The government also said that the Army officers did not sport grown hair but the JDS pointed to the pictures the President Mahinda Rajapakse himself was flanked by Special Forces personnel sporting grown hair and beard. Another comic argument of the government is that the victims shown in the video were fairer than the Tamils in north. Sinhalese and Tamils are mostly alike in physical appearance although the Sinhalese are in an illusion that they are fairer than the Tamils. Fair skin is venerated in this former colony of white Britishes.

However, JDS remained silent without attempting to counter the government that was going the extra mile to prove that the video is fake. Sri Lanka government has vowed to sue Channel-4 for discrediting the image of the country.

The video came in a bad time as the European Union was considering whether they would extend the GSP Plus tariff concessions for Sri Lanka's exports. The island's industries including the biggest income generator garment industry will affect if the tariff concession is revoked. The exports from Sri Lanka will be bare to severe competition from China despite the communist world power is the new ally of the Indian Ocean island which is rapidly drifting away from its traditional allies in West.

JDS is also campaigning for the release of Tamil journalist J.S. Tissainayagam who was jailed for a sentence of 20 years rigorous imprisonment by a Sri Lankan High Court on terrorism charges framed under draconian Prevention of Terrorism Act based on his writings in a pro-Tamil English magazine namely North Eastern Monthly. However, they released the controversial video to Channel-4 a week before the judgment was delivered in August. It is not clear why they released the video that was said to be recorded in January in a time the judgment of Tissainayagam case was to be delivered in few days. However, we cannot find any direct link between the incident and sentence given to the Tamil journalist.

Meanwhile, the same video is now circulated in Facebook with faked Tamil sound track with the title LTTE torturing & killing Sinhala Prisoners of War.
at September 15, 2009 No comments:

Last link to old left of Ceylon passed away

(July 07, 2009) A prominent figure of the early leftist movement in Ceylon and wife of S.C.C. Anthony Pillai, Caroline Anthony Pillai a.k.a Dona Caroline Rupasinghe Gunawardena, passed away in Kosgama, on the outskirts of Colombo on July 06. She was born on October 08, 1908.

She is the sister of Philip, Harry and Robert Gunawardhanas.
She spent much of her life in India, but gradually became less of a revolutionary and more of a helpmate to her husband in the labour movement in Madras, reported The Hindu, quoting S. Muthiah.
S.C.C. Anthony Pillai joined the Lanka Sama Samaja Party (LSSP) in 1936 and party and the leadership soon felt he had the makings of a good trade union leader. But he needed to know Sinhalese and Philip Gunawardena suggested he take lessons from Caroline. Later the teacher and the student go married.
The Party asked them to move to central highlands and, together, despite harassment by both the planters and the authorities, they helped to organise the labour. During the World War II period, as the authorities cracked down on the LSSP leadership, Anthony Pillai went underground in Madurai with the help of Bolshevik Leninist Party of India. He was later arrested in March 1947 and sentenced to two years R.I. for possessing seditious literature.
On June 6, 1946 Anthony Pillai was elected President of the Madras Labour Union and became a major figure in the Indian labor movement.
In 1947, he was elected President of the Madras Port Trust Employees’ Union, in 1948, he was elected to the Madras Municipal Council, then he became, in turn, General Secretary and Vice-President of the All India Port and Dock Workers’ Federation and then President of the All India Transport Workers’ Union. In 1952, he was elected Vice-President of the Hind Mazdoor Sabha, the Socialists’ trade union federation.

S. Muthiah wrote to The Hindu on February 23, 2009, "By then he had matured considerably from the days of the B&C strike, and in the years that followed gained the reputation of being a trade union leader who preferred negotiation to strikes and who encouraged productivity so that he could demand monetarily more for the workers from managements. This ‘softening’ cost him the leadership of a couple of unions."

When Anthony Pillai died in 2000, Caroline returned to Sri Lanka.