Sri Lanka getting more violent and self-disastrous against UN 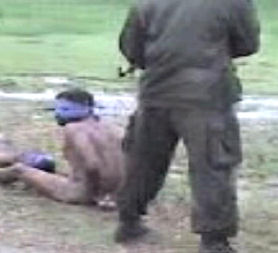 (July 01, 2010, Colombo - Lanka Polity) Sri Lanka is resorting to more violent and self-disastrous methods to deal with the war crime charges raised by international community against the rulers.

Instead of handling the issue directly with the UN in framework of international politics, the government of Sri Lanka is seeking statements from other countries that can be manipulated to pressure the UN General Secretary to withdraw the panel. But, only Russia raised voice against the panel. Even China keep mum, as same as it did in the UN proceedings to frame charges against Sudan President.

In July 2008, the prosecutor of the International Criminal Court (ICC), Luis Moreno Ocampo, accused Sudanese President Omar al-Bashir of genocide, crimes against humanity and war crimes in Darfur. The court issued an arrest warrant for al-Bashir on 4 March 2009 on counts of war crimes and crimes against humanity, but ruled that there was insufficient evidence to prosecute him for genocide. The warrant will be delivered to the Sudanese government, which is unlikely to execute it. Al-Bashir is the first sitting head of state ever indicted by the ICC. The court's decision is opposed by the African Union, League of Arab States, Non-Aligned Movement, and the governments of Russia and China.

Even al-Bashir's government negotiated an end to the Second Sudanese Civil War, one of the longest-running and deadliest wars of the 20th century, by granting limited autonomy to Southern Sudan.Sri Lanka is a significant case in which the policy of the rulers is mere suppression and no power devolution at all, an attitude that is blatantly against the norms accepted by international politics.

Now, Sri Lanka government coalition party National Freedom Front (NFF) leader and Minister of Housing and Construction Wimal Weerawansa vows to launch a fast unto death unless the panel appointed by the UN General Secretary to advise him on Sri Lanka is not dissolved.

Weerawansa has also warned the UN that a protest would be held before the UN office of Colombo.
He urged the Sri Lankan people to surround the UN office in Colombo and keep its staff inside until UN chief Ban Ki Moon decides to dissolve the three-member advisory panel he appointed on Sri Lanka.

Addressing a press conference in Colombo yesterday, Weerawansa said that discussions are underway with national organizations in this regard.

This would eventually lead to the leaders and war heroes of Sri Lanka produced before an international court of justice, he added.