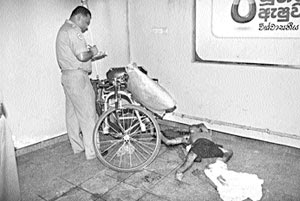 (June 30, 2010, Colombo - Lanka Polity) Sri Lanka's ruling family boasts they would make this country 'the wonder of Asia.' It is already true in some aspects.

Sri Lanka is a poor country where the new found solution for poverty is 'killing beggars.'

An organized group that is ubiquitous and elusive to police in Colombo and suburbs is in a killing spree of beggars whilst no one raises voice regarding the misery of this human waste. The method the killers use for execution is is extremely notorious. They smash heads of the beggars as they are asleep on pavement. The tactic seems achieved its objective of terrifying beggars. Most of them now fear to sleep in isolated places as they did earlier.

In the latest incident, this gang killed a self-employed 38 year-old differently-abled man on a tricycle at Mount Lavinia on June 28. The man identified as Mahesh Perera of Sri Jana Mawatha, Aththidiya was under the front canopy of Union Assurance office whose slogan is 'Trust in your tomorrow, today' in the dark due to rain as he was on his way home bringing a parcel of rice for him bought from the money he earned by selling lottery tickets. The killer smashed his head with a heavy stone covering to the sound of rain.

Another man on a wheel chair was killed around a month ago close to famous Gangaramaya Buddhist temple.

This killing spree goes on scot-free and almost no one in this country that boasts for a two and half millennium long Buddhist heritage bother about these helpless men.