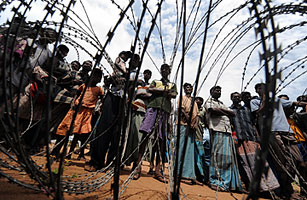 (July 17, 2010, Colombo - Lanka Polity)A dialogue is underway between the President and the major opposition United National Party (UNP) regarding the constitutional reforms.

This dialogue can at least have an impact on the President Mahinda Rajapaksa's possible backward moves to guarantee a royal future for his son Namal Rajapaksa as his uncontested successor.

Opposition can push the President for more democratic reforms even in the context the President may try to achieve his ulterior goals. The President's plans to remove the two-term limit of Presidential terms have been challenged indirectly by his party stalwarts as well as his family. He cannot push Namal into the throne so easily in this backdrop.

Now, the President indicates that he is ready to extend this dialogue even to get the National Democratic Alliance (DNA) that comprises of his arch rival ex-Army Comander and defeated Presidential candidate Sarath Fonseka and the Marxist People's Liberation Front (JVP) involved in it.

But still there are no indications that he is going to have a proper dialogue with the representatives of the minority communities of Sri Lanka at least regarding electoral reforms.

In the Presidential campaigns of both opposition and government candidates in the election 2010, both candidates promised to abolish the executive presidency. Mahinda Rajapaksa promised in 2005 to abolish this draconian power within his first tenure itself. Still he has time until November in which he has planned to swear in for the second term.

Ruling Sri Lanka Freedom Party (SLFP) has a long history of promising to abolish executive Presidency. In 1994, Chandrika Bandaranaike Kumarathunga promised to do so but remained clinging in the power for two terms and passed the hat to the next President.

The proportional representation system has also come under severe criticism in the majority Sinhala community. They try to project their need for change as a common need of the entire polity undermining contradictory views or reservations of the minority communities.

After all, while all were in a verbal war regarding the constitutional reforms, the Tamils in Northern and Eastern Provinces fought a bitter battle for state reforms. They experimented in state formation as well through the Tamil Tigers' state within the state.

Therefore, they are the people that should be consulted somehow if the government really want a sustainable peace through whatever the reforms they are going to propose. But the moves in this regard must be beyond simple electoral reforms. Their demand for a state reform is still valid although the Tamil Tigers' armed struggle was defeated. Tamil struggle has not ended although their armed fight has been defeated.

Meanwhile, the minorities living among the majority community are in fear of losing whatever representation they now enjoy through the electoral reforms.

'The issue of electoral reforms are very fundamental for the Tamil and Muslim minorities live in the southern districts than their counterparts in the northern and eastern provinces. President and leader of opposition should take the Tamil speaking minorities into confidence when dealing with this issue,' said Democratic People's Front (DPF) leader Mano Ganesan in a release issued by the DPF media office.

Ganesan says further in the release, "The national consensus today is for a mixed electoral system encompassing positive features of both first past the post (FPP) and Proportional representation (PR) systems. We endorse this consensus and subsequent national search for an appropriate system. The established apprehension along the line of search is that complete doing away with the PR system would cut down the representations of the minorities inappropriately.

"It should be understood that if any unfair system is implemented, the numerical minority Tamils and Muslims living in the southern districts will be the most affected than their counterparts in the northern and eastern provinces. This is being one of the major core issues being debated over the years in respect of the electoral reforms subject. The fear of the numerical minorities should not be under estimated."

We would like to highlight the following part that clearly portrays the danger of the electoral reforms that does not parallel with state reforms. "Even the mixed system, which is being projected is also has sent an impression of distrust amidst the minority political parties representing the Tamil speaking people live in the southern districts outside north and east. It is essential that all possible avenues must be tried to arrive at the most suitable electoral system. The suitability is to ensure fair minority representation while accommodating positives features of both PR and FPP systems. Disfranchisement and violent denials of voting rights of the Tamil people to elect their democratic representatives have led to turmoil in the past. DPF calls upon the president and leader of opposition to take the minorities into confidence by being mindful of the fear."

This enfranchisement of minority communities in certain districts has already taken place. For instance, the Muslims of Kaluthara district have lost their long lasted parliamentary representation that was guaranteed before the PR system was introduced via Beruwala muti-seat electorate. The sizable community of Indian-origin Tamils that live in this district do not have representation at least in the Western Provincial Council.

These are only two examples. We have just come out of a bloody ethnic war and what now we are in dire need is the reconciliation. among ethnic communities For that, the minority communities are needed to be empowered politically so that they can use their franchise for the development of their community.

For this, we need a state reform plus electoral reforms. These two are like the two wheels of a bullock cart. If one is oversize or under-sized we will not go forward. Instead we will come to the same place after some time.